BEYOND THE BRAIN – the power of intuition in astrology

Astrology – a language of energy

One day I got an email from a client in response to his first session:

“I had no idea astrology contained so much interesting information – where can I study more?” 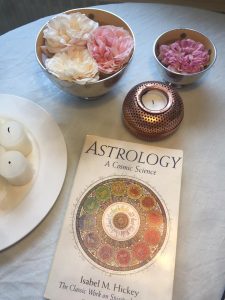 Like many others, he only knew astrology from mainstream media and the daily predictions. A line of astrology mainly for entertainment.

Some clients are blown away by their first reading of the birth chart. A delightful and intelligent 19 year old boy was at a loss for words in our conversation and suddenly failed to remember the answers to very simple questions I posed to him along the way.  A few days later he had recovered and expressed his joy in the new insights he had gained in himself and his potential.

A lot of young people know nothing of this profound tradition of wisdom for self-awareness and understanding of life. Maybe because no one informs them of its existence. In most countries around the world the system of education is not updated on this cultural and spiritual trend that millions of people have practised and studied since the 1960s. 1)

Students get no introduction to spiritual psychology, meditation, mindfulness, the holistic characteristics of cells, water and plants, near death research and other sources that demonstrate a new multi-dimensional perception of the universe. Quantum physics, research in the biology of cells, meditation and near death experiences among others strongly support interconnected dimensions between the physical and spiritual levels. 2)

It is my opinion that neglecting to present this important scientific and cultural knowledge, which is at a level of quality with major world systems of thought, of philosophy and religion, is a major failure of our educational systems. We should introduce it to the students and let them judge for themselves.

Astrology, this great reservoir of ancient wisdom and potential understanding of the mysteries of human life has now been studied anew in the light of modern psychology and other fields of knowledge, and it has been significantly reformulated by a new generation of pioneers with a new language and with a myriad of new applications.

One of the pioneers was the founder of analytical psychology, Dr. Carl Gustav Jung. He stated that “astrology incorporates the sum total of the ancient world’s psychological knowledge.” It is established fact that C.G. Jung used the birth charts of his patients to deepen his understanding of their psychological patterns and behavioral reactions.

Astrology is more than 4000 years old, modern psychology less than 150.

What astrology is concerned with, is energy. We humans and everything in creation consist of atoms. At the core of an atom is energy vibrating on different frequencies. Like musical tones and radio waves. Atom physics is the science of energy, and the relations or interaction between their frequencies. Energy and interacting relations.

So is astrology – a language of energy describing various energies and their interaction or mutual relations. Like music or the system of colors. As perceived by human beings. In the outer physical world, but also at the inner level of consciousness. Which is where you and I experience life, from a point within our consciousness.

Quantum physics points to the fact that the activity of our consciousness affects the behavior of atoms – our entire being takes place in an interactive field of energy. The activity in this field cannot be predicted or calculated with precision, the parts interact in unpredictable ways and create new patterns. But you can establish a limited field of possibilities. Like throwing a bag of apples down a flight of stairs. The apples will fall somewhere on the staircase, not on the roof or in another country. Quantum physics transcends the framework of controlled experiments of the natural sciences, and so does astrology. The findings of near death research demonstrate the ability of humans to have conscious awareness without a functioning brain. 3) 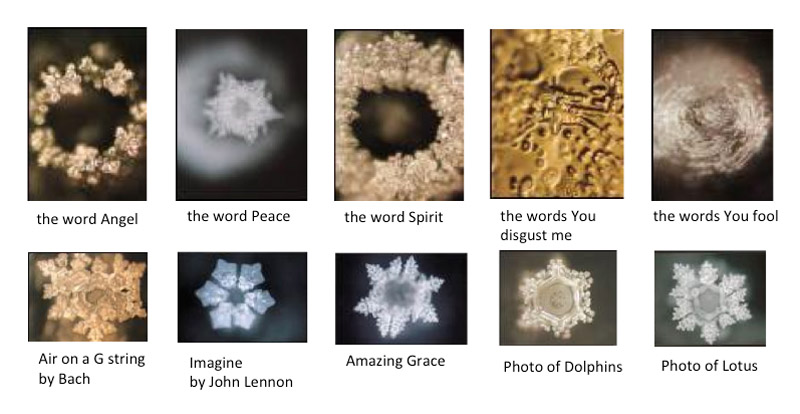 Water crystals. Scientist  Masuru Emoto played music and spoke words to containers of water and then placed them in a freezer.2)

Why the celestial placement of sun, moon and planets has something to say about activity on the physical world and in our consciousness, we do not know. We have not found the mechanism, but that is not just a problem for astrology. 4)

The greatest problem for natural science has always been to define the mechanism of various systems. We do not know, for example, how thoughts are transferred to electric impulses in the brain. And we certainly don’t know how people without a functioning brain can have highly intelligent and structured conscious experiences. Near death experiences seem to happen to individuals who are not medically induced or drugged. On the contrary, research suggest that drugs keep these experiences from taking place.5)

The astrological birth chart is a map of an individual’s dynamic and vibrant pattern of energy. Which energies express themselves in you – your characteristics, gifts and qualities? In which part of you or your life does energy flow with ease, and where is it restricted or blocked? How is the interaction? What are your behavioral patterns? What areas in life are particularly important to you? What have you come here to experience and transform?

In astrology we work with elements, signs, planets, houses and aspects. (Sun and moon are not planets, but are included in this term for easier use.)

The Elements – fire, earth, air and water – are the energy substance of experience.

The Signs are the primary energy patterns and indicate specific qualities of experience.

The Planets regulate energy flow and represent the dimensions of experience.

The Houses represent the fields of experience wherein specific energies will be most easily expressed and most directly encountered. In concrete areas of the individual´s life.

The aspects reveal the dynamism and intensity of experience as well as how the energies within the individual interact.

Astrology describes these energies through symbols and myths.

The symbols may seem simple or even naive, but they contain layer upon layer of meaning and reach far back into ancient times. They pick up the collective experience of human existence and archetypical challenges through the ages.

Symbols and myths are the language of the timeless soul. Words are not enough. 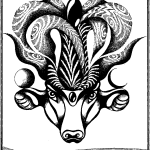 As an example, the sign of Taurus has the bull as a symbol. But in ancient times – in Sumerian and Minoic culture – this sign was connected with the sacred cow as a feminine symbol of fertility and the power to create on the physical plane. To be fertile in the widest sense of the word, you must first be in contact with the vital principle of life, The Universal Source of Creation.

Taurus is therefore one of the earth goddesses, a woman connected with this sacred source in herself and able to express it through her body and senses. The sign is also named the ”Priestess” or “The Interpreter of the Divine Voice.” She connects herself with the beautiful rhythms and tones of the universe and expresses herself sensuously through the birth of a child, song or dance. As in the competent and magnificient Beyoncé, the breathtaking voices of Adele or Barbra Streisand and the participants in an Afro-American church service. As we are describing an energy, men will also contain and express this power in themselves. 6) 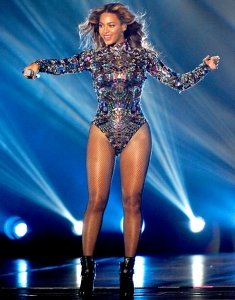 The sign of Taurus reminds us to be connected with our living earth and the natural rhythm of life enfolding. Things Take Time. Roots grow in darkness, sprouts are delicate and growth follows its own calm pace, until the plant unfolds in a carnival of flowers in the wild spring. Many of us have lost connection with this organic pulse of Life. The results are destruction, stress and psychological disturbances. People need time, peace, nurturing presence and care to grow or heal after a disease. The gardener, the expectant mother and the nurse know this, but not societies hunting insatiably for money, possessions and power. What the planet needs is fewer hunters and more gardeners.

All of us need to understand and incorporate the beautiful wisdom of Taurus. And of Capricorn, Aries, Leo, Libra and the rest of the 12 energy types. People born in a sign know and express this energy. We are all a blend of various energies. Only the birth chart shows the precise picture. But all of us are enriched and develop deeper understanding by knowing the different energy types in the world, our families and network.

Astrology is at its core a tool to become yourself and express yourself fully – to FLOWER. And at the same time understand and nurture the growth of others. The tulip, the rose and the lily grows harmoniously side by side without competing and cannot be called egotistical when they unfold…

Read more in my book Meet your Soul, find it here:  https://ninabentzon.dk/kend-din-sjael/ .

Notes:
1)For example, in 1994 the book The Celestine Prophecy by James Redfield describing the spiritual quest of a man looking for existential answers became a huge bestseller worldwide, but was largely ignored by media and schools.  Other worldwide bestselling authors in the millions are Deepak Chopra, Bruce Lipton, Louise Hay and Eckhart Tolle. In the field of natural sciences the breathtaking implications of quantum physics are usually not on the curriculum.
2)Ken Wilber et al, The Transpersonal Dimensions of Man. An introduction to transpersonal psychology. Yongey Rinpoche, The Joy of Living on research in the effects of meditation. Biology of Belief, Bruce Lipton is one of the pioneers of stem cell research. Masuru Emoto explores the effect of words and music on water in The Hidden Messages in Water. In Secret Life of Plants, Peter Tompkins, and in the brand new The Secret Life of Trees, Peter Wohlleben describes the sensitive, nurturing and intelligent communication between plants – and man.
3)Lynn McTaggart, The Field. Amit Goswami, The Self-Aware Universe. Bernadette Brady,  A Place in Chaos – chaos theory and astrology.
4)Stephen Arroyo, Chart Interpretation s. 13. Quote by Dr. Jacob Zigelboim, professor at UCLA School of Medicine.
5) Doctor Melvin Morse reports in Closer to the Light of his research on near death experiences among 133 critically ill children. 12 of them received no medication. His research showed that NDOs took place in a surprising majority of the non-medicated children and was clearly linked to the process of dying.  None, 0 %, of the medicated children had NDOs. Published in American Journal of Diseases of Children, Nov. 1986. P. 47-49.
6) Sheila Farrant, Symbols for Women. A presentation of astrological symbols in Pre Christian world. For example, the sign of Cancer was originally the bees and the sign of Pisces the dolphin.